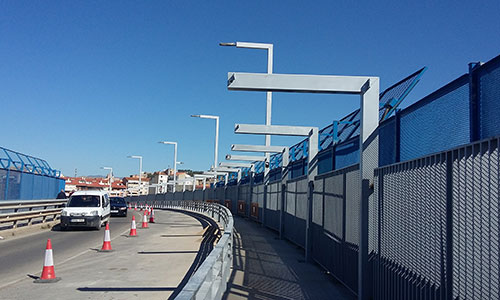 The nascent completion of phase 1.1 works and the beginning of phase 1.2 after its imminent award will allow the Front to Train project, which developed the Conzept team for presentation in the Contest of Ideas convened by the City of C Alatayud in March last year and from which they were awarded the 1st Prize and winners of the project, begins to draw on the physical profile of the city of Bilbilitana.

The winning proposal is an ambitious project of urban regeneration of a transcendental environment for the future of the city, such as the Facade of the AVE, the area near the FF Station. CC and access to the San Antonio neighborhood of the town.

This area is the historical area in which the most important production fabrics of the Industrial Revolution in Calatayud were developed, and whose engine was the arrival of the FF. CC to the town in 1868. Calatayud's track beach housed up to three stations of different companies, various industries, storages and infrastructures as interesting and worthy of reclaiming its memory as the Air Train that transported the iron ore from the Tierga mine.

At present, this area presents a disjointed urbanism, the result of the development of isolated actions due to the need for passage of road or rail infrastructure such as the creation of a bridge in place of the passage at the Level of the N-234 or the arrival of the AVE in addition to the usual urban disorder of the obsolete industrial environments of yesteryear.

The Front of the Train proposal spins the existing urban plots with a new road scheme where green spaces, cycle paths and bike lanes are integrated, creating a re-urbanized platform and new infrastructure so that the pedestrian is once again the protagonist, colonizing these spaces while interpreting the rich industrial historical legacy linked to the city's railroad.

The strategy of the proposal aims to bring the Neighborhood of San Antonio closer to the city center, transforming the physiognomy and the functional section of the bridge over the AVE of the town, to integrate a bike path, pedestrian walker and a covered canopy in its as well as an accessible ramp connecting to the Railway Station and the Sixto Celorrio Promenade.

All the actions will re-qualify these spaces and raise the potential of the adjacent soils, envisaged by the General Plan as the future productive areas of the city, as was once the beach of Calatayud.